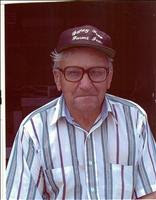 David was born Dec. 8, 1928, in Baltimore, Md., a son of the late James Alfred and Mary Alice Litzan Townsend.

David served in the United States Air Force as a tech sergeant. He sold produce locally and was affectionately known as the "Tomato Man." He was a member of the Oakland Assembly of God. His family remembers him as an honest and hard-working man. He was dearly loved and will be greatly missed.

He is preceded in death by one brother: John Townsend, and one stepson: Bobby Kennedy Sr.

Expressions of sympathy may be viewed or submitted online at: www.emeraldcoastfuneralhome.com.

Published in the Northwest Florida Daily News on 7/5/2009