Jim was born March 24, 1919, in Tioga to John Henry and Vera Lucelle Scroggins Cook. He was a talented high school athlete. After high school, he enlisted in the Army and joined the 79th Troop Carrier Squadron. Upon his discharge from the service, he joined the railroad, where he went to work for the Rock Island Line, working as both a brakeman and conductor for more than 40 years. He was a member of Pleasant Valley Baptist Church for more than 36 years.

Jim loved to garden, tending to his yard, his flowers and his landscaping. He was an avid fisherman, handyman and could fix just about anything that broke.

He was preceded in death by his parents; his first wife, Blanche; two sisters, Tootsie and Gladys; and a grandson, Kim Cook.

The family suggests memorials be to a favorite charity. 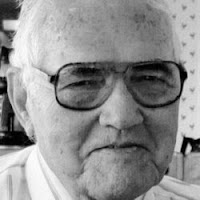